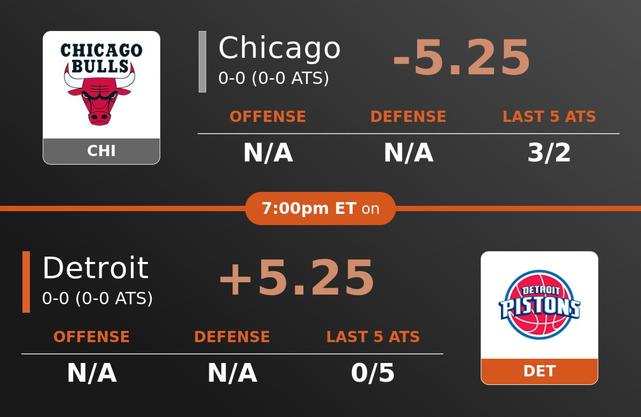 Little Caesars Arena will be witnessing both the teams on Wednesday Evening to start the regular season of 2021-22 by putting two of the most potential NBA teams that being Chicago Bulls and Detroit Pistons, Chicago Bulls were at 11th place in the Eastern Conference with a record of 31-41 but the season performance was critical as it was a huge challenge for the team to completely revamp their roster. Talking about the Pistons, on the other hand, they were last in the same category with an overall record of 20-52. This makes the high chance for Chicago to be in the lead against Detroit.

But before going into further details, let's have a look at the overall record that compelled us to pick for Chicago Bulls over Detroit Pistons. The Chicago Bulls had 4 ATS IN all games to their credit, and Detroit had badly lost all 5 games as an underdog. Secondly, the Chicago Bulls are 7-2 ATS in their last games, while Detroit only managed to make 3 in 10 games.

The Chicago Bulls had an impressive offseason adding point guard Lonzo Ball, power forward DeMar DeRozan, point guard Alex Caruso, and center Nikola Vucevic. They also still have 2021 All-Star shooting guard Zach LaVine. The Detroit Pistons had a quiet offseason. Their only big move was drafting point guard Cade Cunningham with the first overall pick in this year’s draft. The Bulls seem very invested in winning now and that will start in their season opener against the Pistons. This will be one of their easier games played, but it is a good starting point for a team trying to make a deep playoff run.

The Chicago Bulls became the talk of the NBA when then dominated in three of four preseason games. They have the makings of a playoff return with a roster featuring Lonzo Ball, Zach LaVine, DeMar DeRozan, and Nikola Vucevic. Alex Caruso is shaping up to be their sixth man. But beyond them, who can be reliable enough to give solid minutes to let their starters rest? However, they’re lucky that they’re going against the Pistons which still remain a mystery beyond Jerami Grant and Isaiah Stewart. Cade Cunningham will finally play his first NBA game and it won’t be surprising to see him have a strong debut because Lavine isn’t really known for defense. However, the Bulls will get their first win of the new season and the point total will go over 220 because these two teams are not really known for stopping the other team.
Read More
$100 | CHI -217
$100 | OVER 218
@Donraph

The Chicago Bulls (0-0) are coming off a busy off season that has seen the addition of DeMar DeRozan, Alex Caruso and Lonzo Ball to their lineup. These additions will be crucial in elevating their 21st Offensive and 12th Defensive rating going into the 2021-2022 season.

The Detroit Pistons (0-0) currently rated 26th Offensively and 10th Defensively had a relatively quiet offseason. It's unlikely the team is going to make any significant trades and could be headed for the lottery once more.

These two teams will match-up on 10/20/2021 at the Little Ceasars Arena. All statistics point towards the Bulls getting off to successful start to their season.

Both teams are playing their third game in four nights here. The Bulls have the advantage in rest as they had Saturday off after winning Friday night. Meanwhile, Detroit was on the road in Philadelphia Saturday night and then had to fly back home for this one.

The Pistons are potentially going to be missing some of their key contributors here, which would seriously impede their chances. We saw Chicago show signs of life with the return of LaVine to the rotation as they whipped Charlotte by 21 on the road before dropping the Celtics by 22 at home.

The Bulls make it seven straight wins in the series as they take care of business in this one.

Betting Prediction: Chicago will Win, Cover the Spread, and the Total will go Under.